We all mistakes and there have been plenty of times that marketing campaigns have got it wrong. Taking note of the mistakes other companies have made in their marketing campaigns or on their social platforms allows you to make conscious and informed decisions towards your own campaigns.

1. When Marketing Campaigns Got It Wrong: Pepsi x Kendall Jenner

Arguably one of the worst marketing campaigns of the 21st Century, Pepsi partnered with Kendall Jenner to sell their product. Pepsi released this advertising campaign to the mainstream media in 2017, during a turbulent year that was famous for grassroots, political activism campaigning against social injustice.

In a tone-deaf approach to the social climate, Pepsi’s marketing department produced a watered-down effort of ‘activism’ much to the general public’s disdain. Their advert has groups of young people marching down streets holding ambiguous declarations on signs that could filter into any social justice movement.

The advert reaches a head when Kendall Jenner appears amidst these groups of young people to produce a can of Pepsi, handing it to a police officer who is blocking the demonstrators from passing through. The police officer cracks the can while the protest inexplicably cheers.

While Pepsi pulled the advert almost immediately, it was saved by outlets and members of the public, including Kendall Jenner, to remind us of when marketing campaigns got it wrong.

2. When You Hire a Murderer: Nike Marketing Campaign Blunder

This is when marketing campaigns got it wrong isn’t really the brand’s fault. While ironic that his advert was directly correlated with his transgression, all Nike were able to do was pull his sponsorship and release some press statement’s to try and appease the victim’s family. Endorsing individuals or celebrities can come with risks, so always be vigilant about how is representing your company.

3. When Marketing Campaigns Got it Wrong: Heineken and Racism

The favourite dutch beer of many, Heineken released their ‘light’ range with a target market of women and those who still want a beer but with fewer calories. Unfortunately, their marketing efforts caused some serious issues.

While you might assume that surely the beer being lighter in calories couldn’t really be compared to racist connotations, the advert itself seemed to highlight the racist argument. The beer slides down the bar, passing the hands of exclusively black people before landing in the hands of a white woman.

Realising the seriousness of their mistake, Heineken issued an apology, claiming that they strive for diversity and unification, taking responsibility for why their advert missed the mark and promising that this learned experience would be reflected in their future marketing.

Ran in 2006, their campaign was based on billboards that were seen around the country. The central theme depicted a white woman holding a black woman, seen almost cowering, with her hand on her chin. The vibe was meant to articulate how the white PSP model was superior to the older black model.

While Sony claimed it was not intentionally racist, the general public was in outroar of the depictions of a woman of colour in this light. Instead of apologising for their grave error of judgement, Sony did the exact opposite and defended their offering.

Sony released a statement saying that their advert had ‘Stunningly photographed imagery’. This campaign recently resurfaced in 2017 which caused more public outrage who thought it was recent. This example of marketing campaigns getting it wrong highlights how companies need to ensure that their creative vision isn’t interpreted in a negative light.

Usually renowned for their little brown bag, Bloomingdales made a rather awful advertising faux pas with the release of their 2015 holiday catalogue. Considered horrifying by members of the public, it appears that Bloomingdales is actively encouraging date rape drugs for their readers.

The advert has a man looking longingly over at his female counterpart, while the advert reads “Spike your best friend’s eggnog when they’re not looking”. Considered deeply inappropriate, it caused massive outrage online, causing Bloomingdale’s to issue an apology.

Their apology reflected how their copy was deeply inappropriate and could easily cause offence, sincerely apologising for their error. This marketing campaign that got it wrong highlights the need to check copy with multiple people and reflect on the values of your brand.

When Marketing Campaigns Got it Wrong

Marketing can be difficult and appealing to multiple audiences and target demographics demands a lot of research and time developing concepts that are helpful. Being intentional and clear with your call to action and your message is important for a successful campaign. Make sure your strategy is in alignment with the advert you deliver, and learn from other marketing campaigns that got it wrong to prevent further mistakes.

17 Amazing Brand Storytelling Examples: A Brand’s Once Upon a Time

Storytelling is such a buzzword in the marketing industry these days. There’s been a hype about successful brand storytelling examples. What does storytelling mean in a business context? Does it mean that businesses need to hire a James Joyce for their brands to be successful? That’s what you’ll find out in this article. You’ll find […] 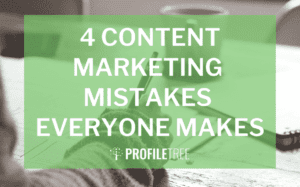 Content marketing is the underdog of business success. By investing your time and energy into it, you will actively engage your audience and equally promote your business. But what’s the catch? There is a common misconception that content marketing is easy. While it can be – if you do it right – there are unfortunately […]